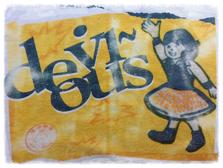 Pint Jars with pinholes in them are turned upside down at a community feeder. they are feed approximately five quarts every four days. the mixture is two parts sugar to one part water with a teaspoon of lemmongrass oil. they love it!!

Video shows the frames from the hive in the extractor spinning the honey from the comb. After spinning one side of the frame, the frames    are flipped exposing the back side and spun again. 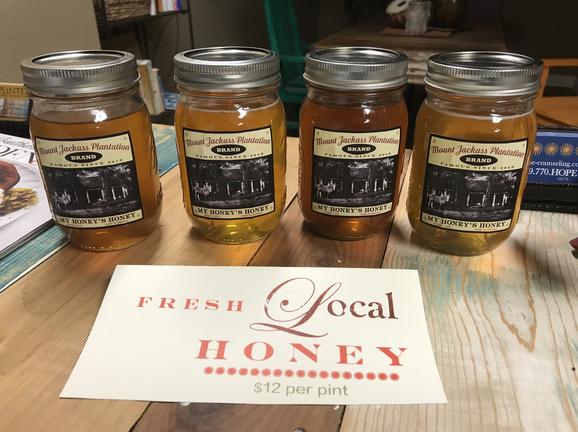 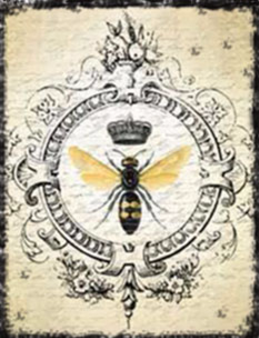 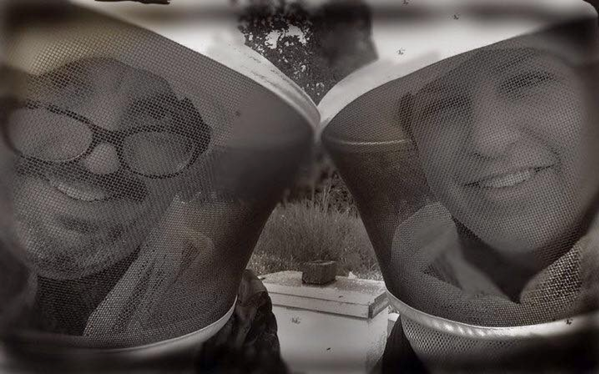 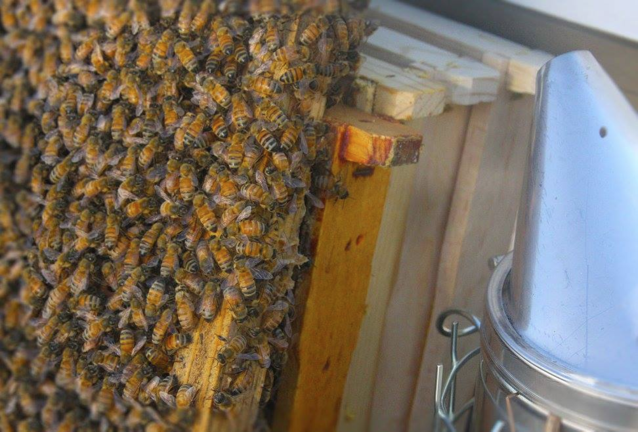 Several pint jars of honey on display at Sweet Emotions Counseling in Springdale, Arkansas, where Kenneth is the Art Therapist. you may notice the different colors. the darker honey is honey, which was made by the bees in the summer of 2016, but not extracted until 2017. This            slight variation in our honey is barely noticeable in taste. I have seen and tasted very dark honey, which looked more like molasses.     Different folks prefer dark to light and vice versa. what most people see sold is the lighter honey. honey never goes bad.                                                  it was found still edible in the egyptian pyramids!!

This photograph was taken in june of 2017. The smaller box on top is called a super, and is added in the springtime, when flowers are in bloon, and the honey flow gets going. from these supers, around the beginning late july, or early august the frames are pulled for extraction. The holes in the boxes were drilled for ventilation, and for extra entryway for bees. they are plugged during the winter months.

Video shows a full frame of capped honey taken from the hive in early august 2017. As a run my finger over the caps, it exposes the honey, and I am able to sample it. Very sweet!! Following this the wax is fully uncapped with a hot knife, then the frame is loaded into the extractor. FYI: the frame is two-sided, and both sides look the same. 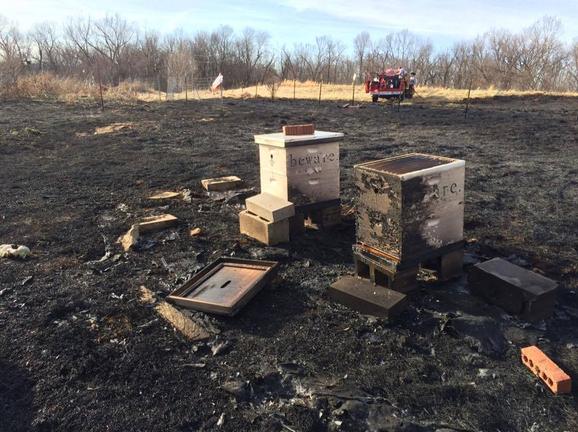 Pouring from the extractor

Honey is poured from the extractor into a wire screen into a five gallon bucket. The screen removes the large pieces of wax and other foreign material. We do not use a tight cheesecloth as to not remove the pollen. The pollen remaining in the honey is what makes unfiltered honey good for allergies. To get the most benefit from this pollen, it is best to purchase honey from your local area. Local pollen builds resistance in your body and helps those prone to seasonal allergies.

Checking the hives in the early spring of 2017, I accidentally kicked over the smoker, and started a fast moving brush fire. The Tontitown fire department was called and quickly put out the blaze, but not before Flames had engulfed one of our two hives.

The arrival of our first bees in April of 2016. Mandy is getting her initial first hand look as the hive frames are transferred from the cardboard nuc into their first floor brood box. Exciting Day. Photography by Kenneth W. Davis. 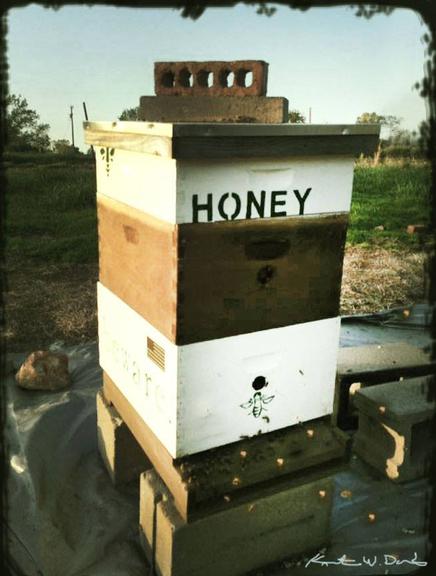 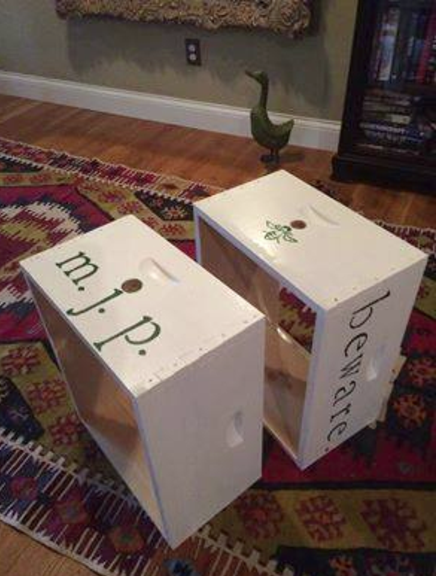 Like most things in life we learn by mistake: This was a real heartbreaker. The hive on the left did survive, and as luck would have it, the following week was the last week to order new bees for the year. I was able to sand down and recover most of the actual hives, But the lost of 15,000 bees was devastating. Trying to keep me upbeat, My neighbor tried to make light of the situation by telling me on the phone,  "I know you smoke the bees, but that looked like overkill". He is also a beekeeper, and has given us much needed advise, and lent us equipment. 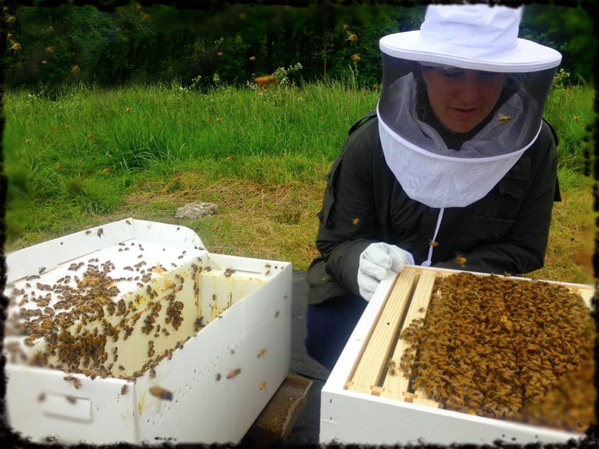 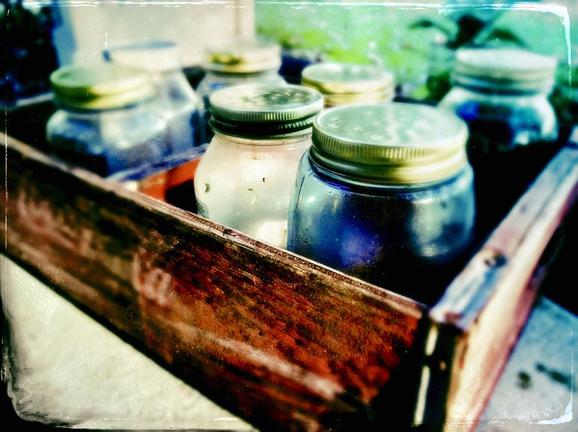 In 2016, Devious Design became interested in the art of beekeeping, and making pure unfiltered local Northwest Arkansas honey: Produced under the name; Mount Jackass Brand: My Honey's Honey. The adventure began as a lark, and thinking the bee suits were "cool". My wife, Mandy, and I attended an all day seminar sponsored by Benton County Beekeepers. The event was a bargain. For $10, we received eight hours of education, and even a BBQ lunch. There is so much to know, education and sharing knowledge with other beekeepers is an ongoing process. I believe I made just about every mistake a new Beekeeper could make the first year, including being stung 50-60 times on the top of my head on a late season trip into the hive, and accidentally knocking the smoker over, which started a brush fire, and burned up one of our two hives in 2016. On this page, I feature photos and label designs from our first two years. In addition, near the bottom of the page are videos of the extraction process. The journey continues...

First thing was to gather the vast assortment of equipment. These are the main brood Boxes, which the first year's goal is to have the bees build comb, and store honey for the winter. Normally, Honey is not taken the first year, and these boxes are for the bees. Of course being a designer, I had to have them decorated. The initials "MJP" being for Mount jackass plantation near tontitown, Arkansas.

A good close up look at a healthy frame of bees with the smoker on the right had side of the photograph. Photography by Kenneth W. Davis.

One of our early Beekeeping Self-Portraits. The excitement of our new venture is clearly evident. Pictured: Kenneth and Mandy Davis. 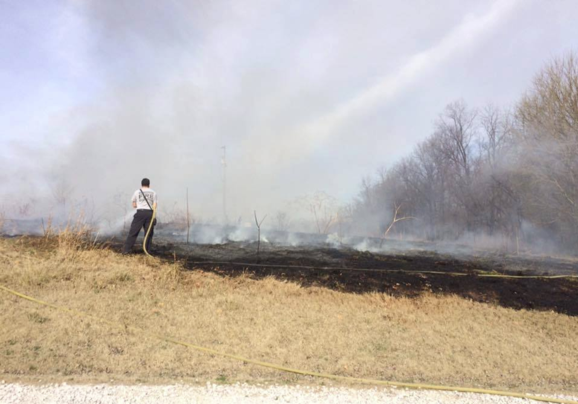